Over the last two months the team in Bunbury have participated in a successful breeding program of Fairy Terns, which are officially listed as ‘vulnerable’ under State and Federal legislation and are a protected species.

Southern Ports’ staff are working with Murdoch University and the Department of Biodiversity, Conservation and Attractions (DBCA) to monitor and protect the Terns at the Outer Harbour, which is the largest colony in WA in 2019. Our team have provided escorted access to the Outer Harbour, signage and arranged control of feral cat and rat populations.

“Recent data from the DBCA have indicated 176 adults on the nest and a further 50 adults on the shore line. So far about 44 chicks have hatched with plenty more to come and 13 shelters have been provided to protect them once they start running,” said Lissel.

The program is expected to continue until the chicks have fully fledged. Further information about the Terns can be found on the DBCA website. 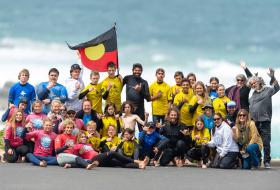