Albany and Bunbury ports shine a light on DV

Albany and Bunbury ports shine a light on DV 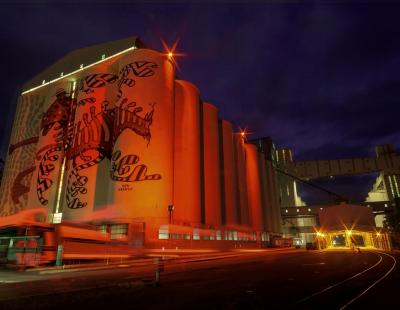 Southern Ports has partnered with the CBH Group in Albany and Hexion Australia in Bunbury to light up the Bunbury Outer Harbour and grain silos in orange lights in recognition of the 16 Days in WA campaign to raise awareness of the impact domestic violence on our community.

Southern Ports CEO, Steve Lewis said Southern Ports is fully supportive of campaigns like 16 Days in WA that encourage positive change in behaviour about violence against women in our regions.

“We want to raise awareness about the devastating impact violence against women has on our regional communities,” Mr Lewis said. “It’s been great to work with the CBH Group and Hexion Australia to provide a physical reminder for the 16 day period to initiate conversations within the community about the importance of putting a stop to family and domestic violence.”

About 16 Days in WA campaign

Several prominent landmarks around Western Australia will turn orange in support of the annual 16 Days in WA to Stop Violence Against Women campaign.

Now in its fourth year, 16 Days in WA draws inspiration from the global movement for 16 Days of Activism Against Gender-based Violence to drive a change in culture, behaviour and attitudes that lead to violence against women and their children.